A little help for our friends

The transition from military service to civvy street—life as a civilian—is hard for veterans, especially those burdened with injuries both obvious and invisible. Finding a job, a home, a place in the world can be just out of reach for some of the noble men and women who wore our country’s uniform.

The mission of Tech4Troops Project, a 501 c (3) non-profit organization, based in a Henrico warehouse, is to provide refurbished computers to veterans in need and teach them basic technical job skills. 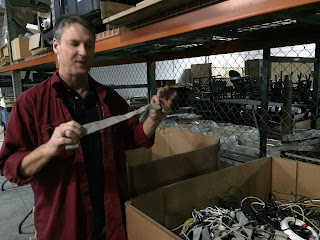 Rockville resident Mark Casper, who became executive director last year, would like to see T4TP participate in filling the approximately 17 thousand current Virginia job vacancies in the computer and cyber security field with veterans. Casper, who served in the Marine Corps, has a background in the information technology field.

A wall covered with graffiti supporting our troops, created by Girl Scouts from Ft. Lee, greets visitors as the enter the inner sanctum of T4TP. Stacks of donated electronics, and neat bins filled with components are everywhere. 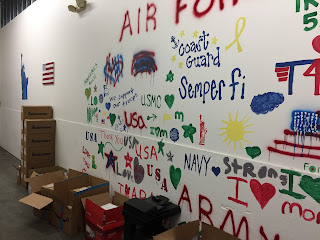 “Some of these we can refurbish for use, some we dismantle and sell for scrap or upcycle into art,” Casper says sifting through bins of cables, ribbon connectors and other parts.

Special donations of technological artifacts, including a blue electric typewriter and overhead projector will not be broken down for recycling, but serve as reminders of the “olden days” of technology.

T4TP, collects used computers and other electronic equipment (it cannot accept CRTs—the giant desktop screens of yore—printers, or televisions) to either refurbish and give to needy vets, or dismantle and recycle. This keeps old electronics out of landfills and raises a little money for the organization. 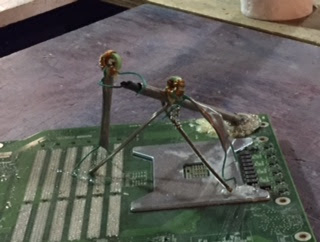 T4TP began a few years ago, when Founder Laurie Phillips and son Chris wanted to help a friend of Chris, newly returned from war, who was trying to find his way back into the world and having trouble landing a job.

“Computers are part of everything we do today,” said Casper. “You can’t put a resume together or file a job application on a phone. Libraries restrict the amount of time you can use their computers. If you’re going back to school, you need a computer of your own to keep up with classwork. If money is tight, they’re hard to afford.”

T4TP has donated computers to veterans in need and their children in the Richmond area. It put a computer lab in McGuire Veteran’s Hospital and shipped computers to needy vets in Martinsburg, West Virginia. Former service members seeking computers must be sponsored by a veteran’s organization such as the American Legion.

The organization has recycled more than 146,000 pounds of bits and pieces over the years and keep it out of landfills. Donations are tax deductible.

Community support for the mission of T4TP has been strong. Area companies including Goochland based CarMax and Performance Food Group have donated used equipment and encouraged their employees to volunteers for regular work sessions. Other businesses donate food for these work sessions, or make cash donations. The Albemarle County Regional Jail recently donated all of its old computers to T4TP.

T4TP wipes hard drives of the electronics it receives using state of the art programs. “We never open the hard drives,” explained Casper attaching a laptop drive to a computer that runs three separate diagnostic programs to determine if the drive can be salvaged. “If the drive does not pass even one of those tests, it gets degaussed with powerful magnetic fields.”

Many of the donated computers have dead batteries or faulty hard drives. While the drives can be swapped out after they have been wiped, the dearth of working batteries has been an impediment. A donation of replacement laptop batteries is high on Casper’s wish list. 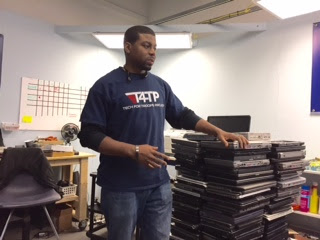 Duane Osborne with a stack of laptops waiting for batteries.


Dedicated volunteers make T4TP possible. Regulars are veterans themselves, many have served on active duty in the Marine Corps. Dana, a retired Army officer, learned about the organization through his West Point alumni group. He liked what he saw during a tour, and now spends several hours each week at T4TP, doing whatever is needed.

As T4TP operates on a shoestring budget, Casper takes it one day at a time. He’d like to be able to hire a part-time clerical person to handle paperwork, but would be grateful for someone to volunteer for this task on a regular basis.

T4TP is a great place to take your old computer equipment, especially knowing that it will be put to good use. T4TP are located at 4848 Waller Road, on the opposite side of Staples Mill Road from the new Libbie Mill complex. Visit the website http://techfortroopsproject.org/ or follow them on Facebook at Tech for Troops Project.